Although it has been over a decade since the release of the human reference genome sequence, our understanding of the genome is far from complete. In fact, the function of DNA is largely determined by its underlying chromatin structure, which refers to the three-dimensional organization of DNA in a cell. Chromatin features – including nucleosome positioning and histone post-translational modifications (PTMs) – regulate accessibility to transcription factors and other DNA-interacting proteins, underscoring their importance across all biological processes. The ability to map these features is essential to understanding their role in specific biological contexts, including diseases such as cancer and diabetes, and has provided new strategies for diagnostic and pharmaceutical development.

However, despite the progress that has been made, the field is restricted by the power of its technology. Chromatin ImmunoPrecipitation (ChIP), the most widely used method for assaying protein-DNA interactions, suffers from a number of limitations. Researchers desperately need better methods to advance the study of chromatin and improve its application towards drug development and personalized medicine. Cleavage Under Targets & Release Under Nuclease (CUT&RUN) is a novel method to investigate protein-DNA interactions and histone PTMs that will help launch this next era of chromatin research.

Since its development in 19881,2, ChIP has been adapted for a wide range of applications and has contributed to many important discoveries across the genomics field. During ChIP, a pool of fragmented chromatin is treated with an antibody specific to a chromatin-associated protein or histone PTM (Figures 1 and 4). Isolated DNA associated with the antibody target can be purified and prepared for targeted (ChIP-qPCR) or genome-wide (ChIP-Seq) analysis.

Despite its omnipresence, ChIP suffers from a number of serious drawbacks that limit its accuracy and sensitivity. The standard ChIP assay is time intensive, has fairly low resolution, requires a large input of cells, and is incompatible with insoluble chromatin proteins. Modifications to the protocol (e.g. ChIP-exo, which utilizes an exonuclease to achieve higher resolution) address some, but not all, of these issues3.

In 2004, the Laemmli group pioneered two novel methods to study protein-DNA interactions, Chromatin Endogenous Cleavage (ChEC) and Chromatin ImmunoCleavage (ChIC). These protocols were cleverly designed to eliminate the initial chromatin fractionation and solubilization steps required in conventional ChIP, via the use of a modified micrococcal nuclease (MNase) that specifically cleaves DNA at regions interacting with a protein of interest4. Importantly, MNase is activated only in the presence of Ca2+ ions, allowing for controlled activation of the cleavage step. In ChEC, which can be performed on either native or fixed cells, the protein of interest is genetically modified to include an MNase domain. In ChIC, the protein of interested is first tagged by an antibody. The antibody is then recognized by Protein A, which is fused to the MNase (pA-MN; see Figures 2 and 4). The ChIC method of tethering the MNase via Protein A does not require any transgenic modification to the target protein and can be adapted for most ChIP studies. Both ChIC and ChEC were shown to be highly specific and have up to 10x higher resolution than conventional ChIP methods4,5.

The CUT&RUN approach evolved from ChIC, adapting the original method to reduce background and enhance compatibility with deep sequencing6, 7. In CUT&RUN, unfixed cells are immobilized on magnetic beads and permeabilized. The cells are then incubated with antibodies specific to the protein of interest followed by inducible pA-MN cleavage (Figures 3 and 4). The MNase selectively cleaves DNA at antibody binding sites, releasing small chromatin fragments that diffuse out of the cell. The protein-bound target DNA is then extracted from the supernatant for sequencing or other targeted analysis. This method results in drastically decreased background, making it amenable to reduced cellular input and lower read depths compared to other chromatin mapping methods. Combined with its high resolution and a dramatically accelerated workflow, CUT&RUN is an attractive method that is rapidly gaining traction. The advantages of CUT&RUN over ChIP are further discussed in our CUTANA™ platform brochure and summarized in Table 1 and Figure 4.

CUT&RUN has been applied to various projects, including regulation of developmental gene programming8-10, analysis of CRISPR-modified transcription factor binding11, maternal imprinting12, and cell cycle regulation13, 14. Notably, a number of these studies were made possible only because of advances in CUT&RUN compared to conventional protein-DNA interaction mapping methods.

Additional modifications to the CUT&RUN protocol have expanded its application to more challenging targets, such as large or insoluble protein complexes7. CUT&RUN has been combined with salt fractionation to study centromeric chromatin (CUT&RUN.Salt)15, and with ChIP to study chromatin factor co-occupancies (CUT&RUN.ChIP)16. It has also been modified to isolate chromatin-associated RNA (CUT&RUNER)17, and to work with ultra-low inputs such as single cells and pre-implantation embryos (uliCUT&RUN)18.

The latest modifications to the standard CUT&RUN method further improve upon the base methodology. Specifically, the Henikoff and Ahmad groups have developed a hybrid Protein A-Protein G-MNase construct to expand antibody compatibility, a modified digestion protocol, a novel-peak calling strategy, and a calibration strategy using carryover bacterial DNA19.

There has been a rapid and growing interest in CUT&RUN since its publication in 2017. The protocol has been made available on an open source repository where it has received over 20,000 views (second only to a recipe for 50X TAE in popularity), and materials have been distributed to over 500 laboratories world-wide. As of July 2019, there were 27 papers published or in preprint that utilized CUT&RUN or a variant thereof, with almost half of those in 2019 alone, highlighting the rapid adoption and excitement surrounding this novel method. CUT&RUN promises to be a groundbreaking strategy for the study of protein-DNA interactions, producing high quality data from low cell numbers in a fast, approachable manner.

Trying CUT&RUN For the First Time?

Contact us with any questions about assay setup and optimization! In addition, Dr. Henikoff's group maintains an active online forum for the CUT&RUN protocol, serving as an important technical resource. 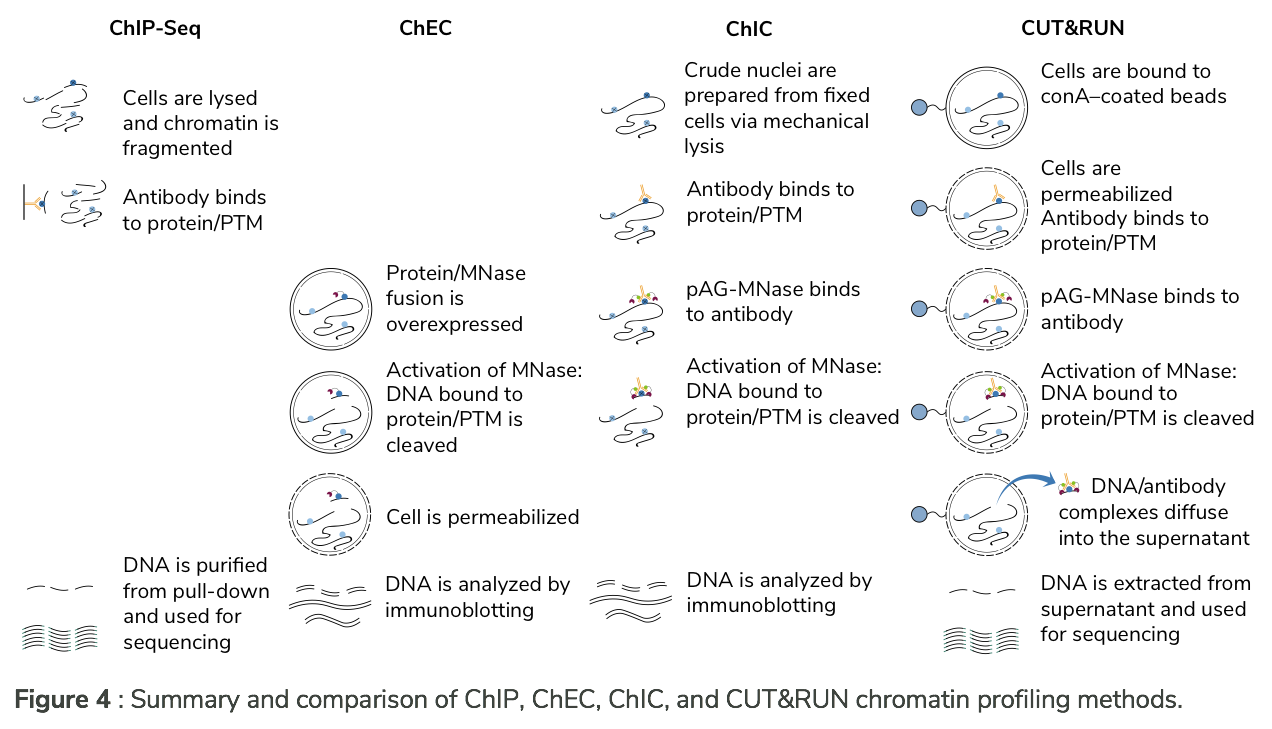