As the quality and specificity of antibodies is an ongoing issue in biomedical research1, 2, there has been a growing demand for reliable controls. EpiCypher’s SNAP-ChIP® approach is rapidly becoming the new standard for controlling chromatin immunoprecipitation (ChIP) experiments to histone post-translational modifications (PTMs)3.

We encourage the use of SNAP-ChIP spike-ins in every ChIP, as they empower scientists to monitor experimental variation, avoid sequencing poorly prepared samples, provide validation during peer review, and enable accurate normalization across samples3, 4. Thus, SNAP-ChIP spike-in controls increase confidence in experimental results and assurance that biological findings can be specifically attributed to the target of interest. 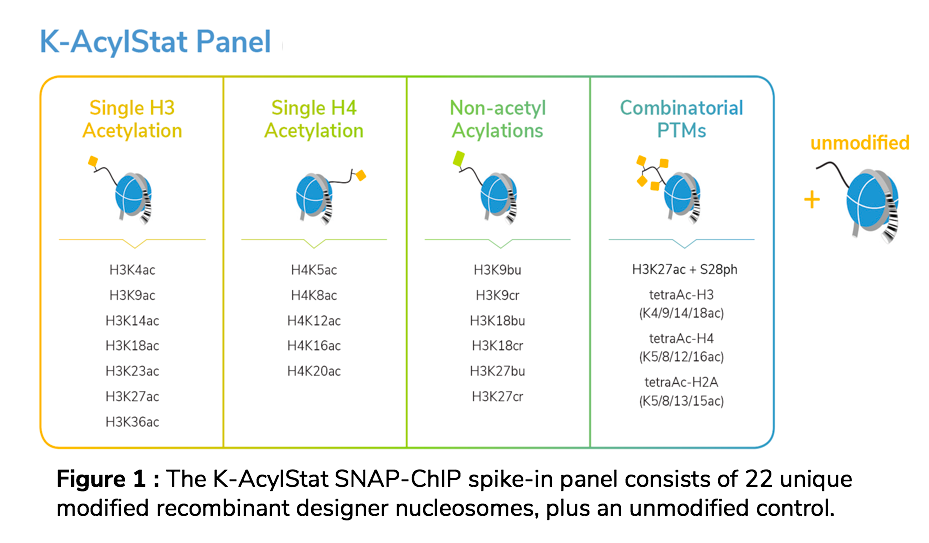 Enables the Study of Combinatorial PTMs

The impact of physiological co-occurring PTMs on chromatin is gaining recognition in the field, and has been shown to impact antibody binding on chromatin 6-16. Indeed, there have been multiple studies describing the polyacetylated chromatin preference of site-specific H4 K-acetyl antibodies 7, 9. In contrast, many PTM epitopes are masked or altered in the presence of adjacent PTMs, as is the case with H3K27ac and H3S28ph6, 7.

Antibody Binding can be Altered

As part of EpiCypher’s research program, the new K-AcylStat panel was used to screen >100 commercially available ChIP-grade antibodies to various lysine acylation PTMs. These experiments demonstrate that many acetylation-specific antibodies are impacted by adjacent modifications. For instance, in testing H3K18ac antibodies, some antibodies had equal binding on poly-acetylated vs. single-acetyl nucleosome substrates (Figure 2A), while other antibodies clearly preferred a poly-acetylated nucleosome (Figure 2B). This distinction is important to know when analyzing your ChIP-seq results, as differential binding to various acetyl forms could greatly impact (or complicate) interpretations. 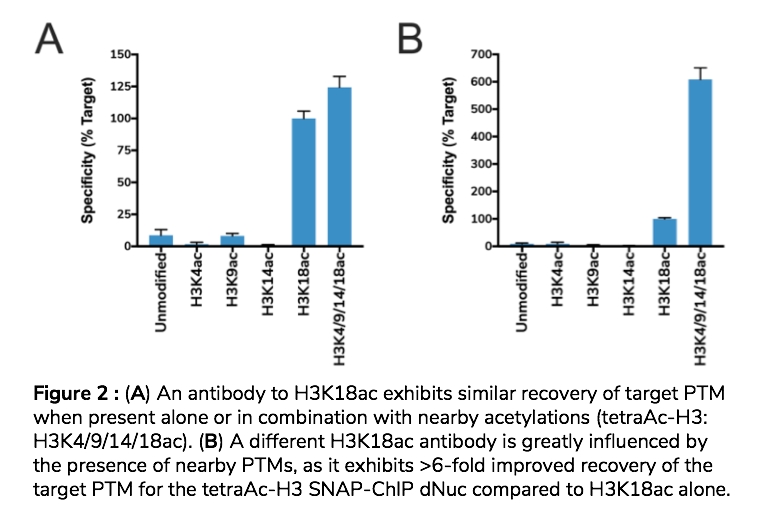 Another interesting trend EpiCypher observed is that many acetyl-specific antibodies also recognize the structurally related butyryl and crotonyl marks. This phenomenon was particularly evident in testing H3K9ac antibodies, which revealed different affinities of H3K9ac antibodies for the butyryl PTM (Figure 3A vs 3B). As extended acyl states are rapidly gaining appreciation for their important roles in epigenetic biology and disease5, 17-19, the ability of antibodies to distinguish between these PTMs is critical for deciphering experimental results. 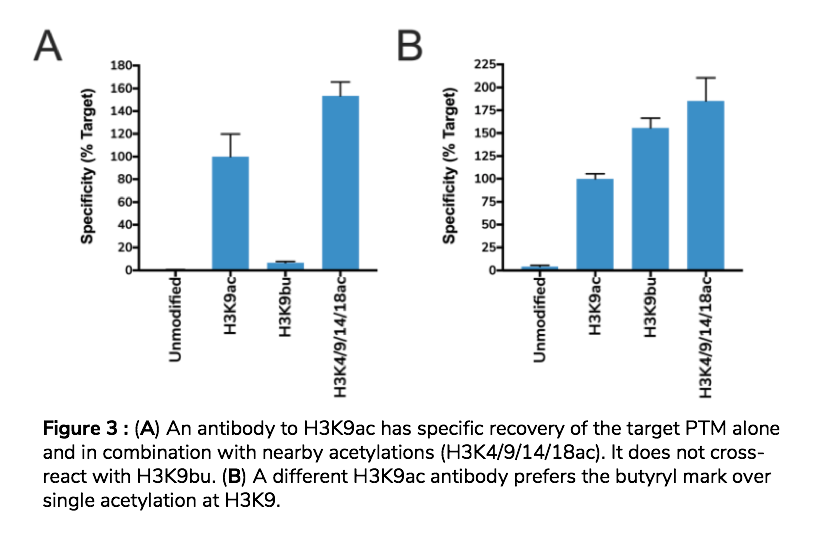 Better Reagents for a Better ChIP

Along with the launch of the K-AcylStat SNAP-ChIP spike-in panel, EpiCypher is also releasing a complementary set of SNAP-ChIP certified antibodies. Thus, among >100 antibodies tested, the highest quality reagents exhibiting superior specificity and efficiency of target recovery are now widely available!

Although EpiCypher has done the hard work of identifying these gold-standard reagents among the myriad commercial “ChIP-grade” antibodies, the inclusion of SNAP-ChIP as a spike-in control for every experiment is strongly recommended (click here for more info).

Do You have Questions about SNAP-ChIP Spike-Ins?

The list of SNAP-ChIP Certified Antibodies is rapidly growing to fill demands in the field; check this page for the most up-to-date collection of SNAP-ChIP validated antibodies. In addition, EpiCypher has recently announced a partnership with ThermoFisher Scientific® to produce best-in-class PTM antibodies. The K-AcylStat panel is an essential step toward the generation of highly specific antibodies and related tools for the chromatin research. Stay tuned for updates; it’s going to be an exciting year!