In the past decade, scientists have uncovered more than 100 unique histone post-translational modifications (PTMs), representing diverse chemical moieties at various positions on the histone core1. Presumably, each of these modifications has some role in regulating chromatin architecture, and may be novel targets for diagnostic or therapeutics.

This is partly due to the slow gains made in science over time; it can take years to convince scientists that something new is actually worth studying2! 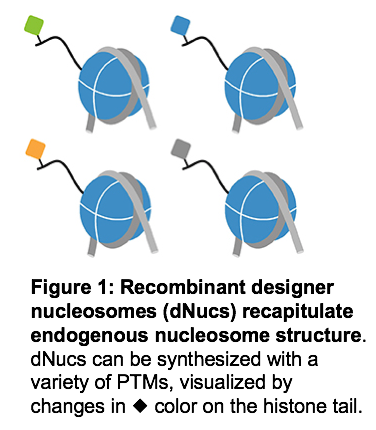 However, it may also be due to a lack of precise controls that model endogenous nucleosome structures. EpiCypher has pioneered the development of modified recombinant designer nucleosomes (dNucs), which can be used as substrates and standards in a variety of assays, including chromatin immunoprecipitation (ChIP; see SNAP-ChIP for more details), Western blot, ELISA, enzymatic / binding assays, and nucleosome remodeling assays (see EpiDyne for more details) .

Our first sets of dNucs were also focused on histone lysine methylation (K-MetStat) and acetylation (K-AcylStat), as well as arginine methylation (R-MetStat) and histone onco-mutations (OncoStat). Recently, we have begun expanding and scaling our nucleosome manufacturing pipelines, and have set our sights on more exotic histone PTMs for scientific research.

Ubiquitin : On Histones Too!

One of the most requested recombinant nucleosome modifications, outside of standard lysine methylation and acetylation, is histone ubiquitination. Although it has been known that ubiquitination occurs on histone proteins since the 1970s3-5, it is only in the past decade that this PTM has started receiving significant attention6. 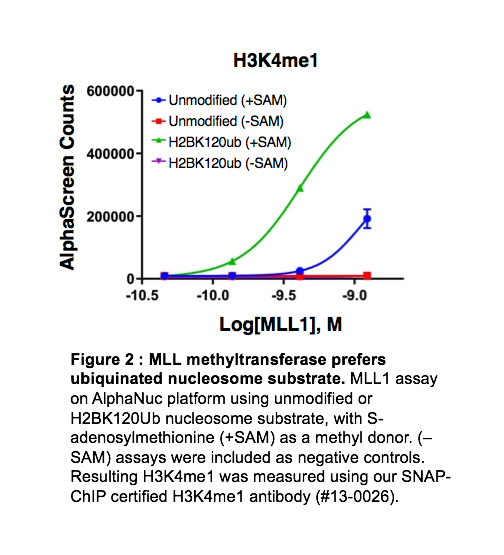 Histone ubiquitination is involved in myriad processes in the cell, including the DNA damage response7 and transcriptional regulation via interactions with chromatin modifying enzymes6. For instance, monoubiquitination on histone H2AK119 inhibits H3K36 methylation by NSD28, while simultaneously promoting the methyltransferase activity of PRC29, a complex that establishes repressive H3K27 methyl PTMs. In contrast, H2BK120ub stimulates transcription, and is essential for methylation of H3K4 by the MLL family of enzymes10 (Figure 2).

Changes in histone ubiquitination have been linked to several diseases, including cancer11, 12, Alzheimer’s13, and congenital heart disease14. Thus, ubiquitin PTMs, and the deubiquitination enzymes (i.e. DUBs) that act on these PTMs, are of high interest to biomedical research. Recombinant nucleosome substrates, such as dNucs, are an essential tool for identifying highly specific antibodies, inhibitors, and binding proteins.

As EpiCypher forays into this new segment of chromatin products, our focus will be on developing full panels of recombinant nucleosomes for unique families of histone PTMs, including ubiquitination, phosphorylation and citrullination. In addition, we are creating nucleosomes with combinatorial PTMs (e.g. H3K27ac + S28ph, H3K4,9,14,18ac), representative of physiologically co-occurring PTMs on native chromatin.

In the case of histone ubiquitination, we have begun this process with the release of our H2AK119ub, H2BK120ub, and H2Aub (a 50/50 mixture of H2AK118ub and H2AK119ub) nucleosomes. Other ubiquitin PTMs are in our manufacturing pipelines, with a full “K-UbStat” set slated for release in 2020.

The creation of these nucleosome panels is critical to advancing chromatin research. In order to fully leverage histone PTMs for biomedical and pharmaceutical development, scientists need access to a broad and diverse array of physiological nucleosome substrates. Although many labs use modified histone peptide arrays, our recent study in Molecular Cell revealed that these arrays are not predictive of protein binding on native chromatin15, and specificity should be confirmed on a nucleosome substrate in the intended platform. 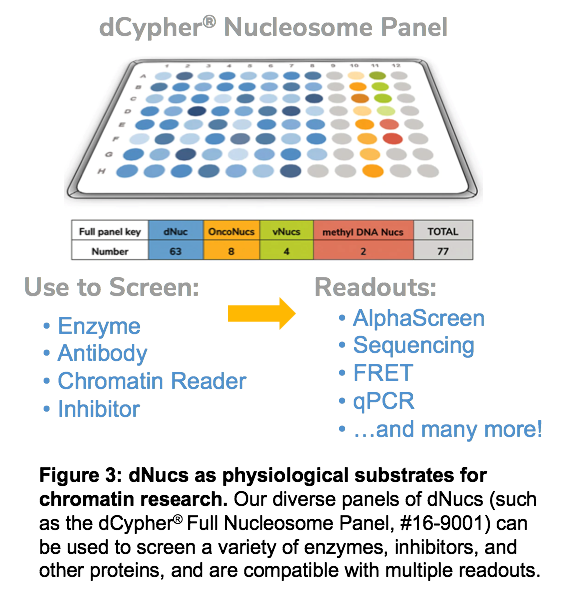 However, for academic and industry labs, dissecting an epigenetic mechanism against one to three modified nucleosomes is not a particularly efficient or rigorous approach. This is precisely why we developed the dCypher® nucleosome panels (Figure 3; see this blog post for more info). Each set enables comprehensive analysis of your drug / enzyme / antibody against both on and off-target modified nucleosomes, so you can be confident in your results going forward.

We are constantly adding new PTMs to our existing list of recombinant nucleosomes (see here), and our most popular dNucs are now available in smaller packs sizes! If you are interested in how our nucleosomes can be applied to your research, drop us a line at info@epicypher.com.

Do You have Questions about dNucs?